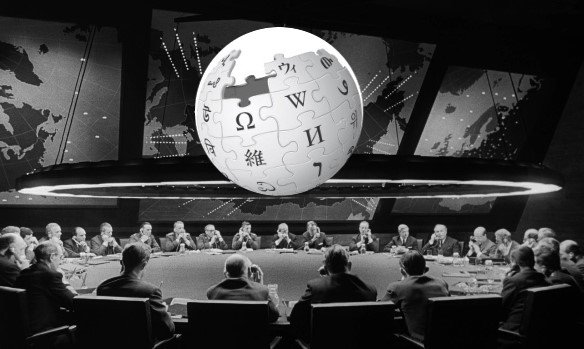 Like most scholars, my attitude towards Wikipedia used to be one of ire and resigned hostility. Not for nothing: Wikipedia upends the norms of responsible knowledge production with results that can be outdated, inaccurate, tendentious—at worst, insidious. It literally lets any yahoo on the internet determine the state of knowledge on any given topic and leaves the editing to the mob. It doesn’t credit work or recognize expertise.

But then, I learned, essentially, to stop worrying and love the wiki. What happened to make me change my mind? Three realizations:

What would I have preferred to see in place of Wikipedia? I’d rather we turn back the clock to the year 2000 and have a worldwide consortium of universities, with large-scale public funding, produce an open-access “world encyclopedia” written by a broad team of scholars and governed by the standards of scholarly inquiry. (Perhaps this could have been done by non-contingent scholars as a mandatory public service counting towards tenure and promotion, or by any scholar for fair pay; doesn’t really matter, because we’re in the realm of alternate history here.) As a bonus, we in the now-dead humanities could have productively pointed to a widely-used “world encyclopedia” in response to that persistent question, “What are liberal arts good for, anyway?”

Instead, what we have is the art of the possible in public scholarship. And people, many millions of people, including journalists and students and ordinary citizens, use it! To satisfy curiosity! For reference! For growth. This is a good thing. Mostly.

The caveat is that the quality of its information is not uniform. As I see it, there are two predominant problems with Wikipedia: random sourcing and outdated information. Below are specific examples of each.

Random sourcing (due to lack of expertise)

For a community obsessed (correctly) with citation, reliability, and verifiability, Wikipedia does a poor job of citing representative sources. This is because knowing which sources are central and which are peripheral to a subject is a matter of expertise and access to institutional repositories. Instead, Wikipedia relies on what’s available4 instead of what’s important. If an article’s footnotes are random, constrained by what is publicly available on the web or what an untrained person happens to find, they can’t tell a judicious, complete, complex, verifiably true story.

As an example, let’s take the English Wikipedia page for the protagonist of my dissertation, Abba Mari ha-Yarchi. (How nice for him that he’s just Abba Mari on English Wikipedia; he’s really not the most famous Abba Mari in town, which is why on Hebrew Wiki he’s אבא מרי הירחי. The Hebrew article is, overall, of slightly higher quality than the English, though it has zero citations.)

Now, there’s a lot to quibble with on this page, not the least of which is, “(in his opinion)…[this] threatened the authority of the Old Testament.” But let’s stick to critiquing the problems with the sources and how they shape an inaccurate picture.

First of all, the basis of the Abba Mari article is a public-domain source from 1906 (more on this in the next section on outdated information). The original article is actually better than the edited Wiki version, and by better I mean more detailed, more specific, more informative, and more correct for the state of knowledge in 1906, probably because it was written by a pair of scholars who signed their names at the top.

This is also why the only secondary sources in the Wiki’s footnotes are from the 19th century, by Heinrich Grätz and Leopold Zunz, two giants of Wissenschaft des Judentums, the German maskilic movement for the critical study of Judaism. Because they’re cribbed from a scholarly source, the citations use shorthand that’s likely unreadable to the wider public. For example, note 7, which read”Grätz, Gesch. d. Juden, vii. 173,” presumably refers to Grätz’s Geschichte der Juden von Den Ältesten Zeiten bis auf die Gegenwart, 1st ed., 12 vols. (Leipzig, 1853), 4:173. Note 8 doesn’t mention Zunz at all, because everyone in the field knows Synagogalen Poesie. But I’m guessing the average Wiki reader does not. Not that it matters, because, the average reader also doesn’t read German (including its quaint 19th-century variant spellings) or know how to track down the Zunz volume. They probably also don’t know how to look up Hebrew manuscripts either, so they won’t mind a citation like “Paris, Bibl. Nat.” in note 6. (This is like saying “go look in the biggest library in Paris that houses thousands of Hebrew manuscripts, it’s there, trust us.” Incidentally, you can find the full list of manuscripts in, you guessed it, my dissertation.)

A great as those heady Wissenschafliche days were, volumes and volumes of scholarship have been produced in the 150-odd years since then. That’s not to say that a Wiki article needs a multitude of sources, just judiciously selected ones. So maybe, like, Twersky, Ta-Shma, and Talmage (and those are just the Ts, to paraphrase the grad student scene in Footnote). Had any of these sources been consulted, one would have immediately come to the conclusion that Abba Mari hailed from Montpellier, not Lunel (Lunel was a prestigious city with an important academy, so people liked to mention that their families were from there, like a guy from Cincinnati saying, “We’re from Brooklyn though!”)

More problematically, the Wiki article fails to cite the 1991 critical edition of Abba Mari’s key work prepared by H. Z. Dimitrovsky, referencing only the important but deeply flawed 1838 Pressburg edition (which garnered the approbation of the Chatam Sofer, incidentally). It gets the primary source of the accurate text completely wrong.

Overall, the Abba Mari article is not egregiously wrong and is generally helpful, especially considering that the subject matter is relatively obscure. Is it better than nothing? Yes. Is it true given what we know today? Sort of. Could it be much better with knowledgeable editing? Absolutely.

As seen in the example above, in my field, much of the material on English Wikipedia is taken directly from the 1901-6 Jewish Encyclopedia since it’s now in the public domain. The 1906 Jewish Encyclopedia was a magnificent work, which is occasionally worth consulting even today. It’s also completely out of date. We’ve had over a century of discoveries, including the Cairo Genizah and the Firkovich collection. It cannot responsibly be used straight up.

As an example, let’s look at the English Wiki on another Abba Mari, a contemporary of the aforementioned one: Abba Mari ben Eligdor. (Abba Mari was a not-uncommon Jewish name in medieval Provence.) Few of his works survive, but he was an intriguing posek and philosopher in the Provençal rationalist tradition. You can compare his English Wiki to his Jewish Encyclopedia entry, then to his Hebrew Wiki (which is improved by direct citations from primary sources in Hebrew), and then also to his Encyclopedia Judaica entry.

What’s interesting about the EJ entry, which was updated in 2007 from the original publication in 1971, is that in the case of Abba Mari ben Eligdor, there hasn’t been any major new research focused on this figure alone. (There have been recent studies that mention him or deal with his work, which ideally would be cited in the Wiki entry.) As such, the JE is less out-of-date in comparison with the EJ than the JE source on Abba Mari ha-Yarhi we looked at in the section above. Even given this, you’ll notice that the EJ is a substantial upgrade from the JE/Wiki. It gives more precise citations, assesses the state of knowledge in the 21st century, and generally provides a better overview of Abba Mari ben Eligdor’s significance for Jewish culture. Because it’s copyrighted, someone would have to do the work of updating the Wiki in their own words. No one has.

Do these kinds of problems justify the dismissiveness of the academic establishment towards Wikipedia? A predictable line of thinking (in anti-intellectual America, anyway) is that we elite guild members are loathe to give up our status and knowledge monopoly, threatened by the impending uselessness of our hard-won degrees. I don’t buy it. Have you hung out with any professors lately? We love it when people care about our tweedy ivory-tower obsessions subspecialties. It’s not us pricing our books at $200 and paywalling our work in academic journals; chances are, we’re uploading it everywhere, especially the spammy but serviceable academia.edu, just so someone will read it, use it, cite it, finally, please. And if the publisher is really uptight about copyright, just email us, we’ll quietly, happily send you the pdf proofs.

Okay, so what’s the deal, then? Even expert scholarship needs to be hand-checked; no responsible scholar will cite research in their own work without tracking down and confirming the source, investigating opposing views and updated research, and checking the primary sources, including textual and quantitative raw data. That’s a big part of critical scholarship. Because Wikipedians aren’t required to do that, and there are no standards that their work must meet as blindly judged by competent assessors, their work is unqualified by scholarly standards and fundamentally unreliable. Everything on Wikipedia is suspect, from dating to article focus to individual factual claims. This creates an exhausting amount of work. If we let students use Wikipedia and then we end up doing their source-checking work so that we can fairly assess them.

As much as we don’t like how the sausage is made, hoping that everyone has the resources and predilection to buy the hand-crafted, small-batch, ethically-sourced knowledge product we love to craft is an academic (and, yep, genuinely elitist) pipe dream.

I know, I know: academia is precarious and riddled with unpaid labor as it is; why would any scholar commit to doing more? As I said above, I felt this way for a long time.

Ultimately, I was convinced by several factors. First, my own usage and experience: for example, when I’m studying a chapter of Talmud and need to figure out some basic information about something like the premodern processes of refining raw flax, look, I’m going to use Wikipedia, and I’m going to assume that the information I find there is not totally bogus. That’s the reality.

But, finally, pragmatically, and most convincingly, nothing will change unless we do work to make it better. Fundamentally, Wikipedia is a user-created resource; individual users quite literally shape it. You can be one of them or not. If I want there to be decent information on Jewish subjects for my kids (and all the other kids who are our future) to use, I can’t be a passive consumer of what gets thrown up on Wikipedia (which, incidentally, is a major source of historical information for Sefaria, the Wiki-like ur-source of Jewish texts which leaves its competitor, Al haTorah, in the dust, even though the latter is built by scholars and has far better texts).

Will Wikipedia live forever? According to MIT Technology Review, it was in decline…in 2013. Nothing on the internet is a given. And yet, one of the paradoxical things that Wikipedia readily demonstrates is just how long-lived information actually is. If it’s public domain, crawlable, extractable—it’s on wiki. This makes me think the information resource created by Wikipedians will live on and continue to be influential.

That’s why, as of today, I’m a Wikipedian, too.

My focus is going to be improving and expanding articles in my areas of expertise. I’m purposely using my real name for accountability and credit. You can see what I’m working on my user page.